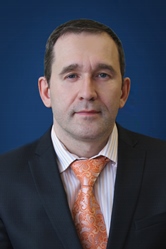 Aginey Ruslan Viktorovich was born on September 17, 1975, graduated from high school No. 13 in the city of Ukhta. In 1997, he graduated from the Ukhta Industrial Institute with a degree in Oil and Gas Well Drilling. In 2004, he received an honors degree in economics and management at fuel and energy companies at Ukhta State Technical University.

From 1994 to 1998, he worked as an oil production operator at the Vozeyskoye field, as an assistant driller at the Kharyaginsky, Pechorokozhvinsky and Pechorogorsky oil and gas fields.

From 1999 to 2012, he worked as an engineer, researcher, and head of the department for the strength and reliability of gas pipelines at the Gazprom VNIIGAZ branch in Ukhta. In the field of scientific interests of Ruslan Viktorovich: diagnostics and non-destructive testing of pipelines, corrosion protection, materials science, strength and life of pipeline structures. In 2012, he was transferred to work at Giprogaztsentr JSC to the position of deputy general director for science.

Accumulated experience and knowledge allowed R. V. Aginey defended her thesis on the topic “Development of a method for assessing the stress state of oil and gas pipelines on the coercive force of metal” In 2005, and in 2009 a thesis for the degree of Doctor of Technical Sciences on the topic “Development of methods for enhancing the anti-corrosion protection of gas transmission facilities”. Both works are by specialty 25.00.19 - Construction and operation of oil and gas pipelines, bases and storages.

Concurrently, since 2006, Ruslan Viktorovich is the Head of the Department for Design and Operation of Main Gas and Oil Pipelines of the Ukhta State Technical University. Over the years, the educational and scientific potential of the department has been raised to a qualitatively new level. Eleven and one doctoral theses have been prepared and defended under his leadership.

In 2012, R.V. Aginey received a certificate on the assignment of the academic title of professor. Ruslan Viktorovich participated in a number of research programs significant for the gas industry, such as bench testing of new generation pipes from high-strength steels for the construction of the Bovanenkovo-Ukhta gas pipeline, pipe certification in the Kamchatka region as part of the state gasification program of the Far East, extension of the life of gas pipelines and compressor stations, development of instruments and equipment for monitoring and diagnostics of oil and gas pipelines and many others.

Since 1999, Ruslan Viktorovich, as an author and co-author, has created and published about 200 scientific papers, 51 inventions and four useful models, monographs, textbooks, methodical works, participated in the development of regulatory documents of PJSC Gazprom and its subsidiaries societies.

R.V. Aginey is a full member (academician) of the Academy of Engineering Sciences named after A.M. Prokhorov, for his fruitful work, was awarded diplomas of the branch of Gazprom VNIIGAZ LLC, Gazprom Transgaz Ukhta LLC, Giprogaztsentr JSC, letters of thanks from the Head of the Komi Republic and the Ministry of Trade and Industry of the Nizhny Novgorod Region, a student of a number of international scientific conferences and competitions In 2010, he received the title of "Professional Engineer", becoming the winner of the All-Russian Competition "Engineer of the Year" in the category "Oil and Gas Industry (Research)". In 2014, he became the winner of the PJSC Gazprom Prize in the field of science and technology.

R.V. Aginey is invited to be a member of two dissertation councils for defending candidate and doctoral dissertations (at Ukhta State Technical University and Tyumen Industrial University) in the specialty 25.00.19 - Construction and operation of oil and gas pipelines, bases and storages.

From April 2018 - Member of the Expert Council on Oil and Gas Issues of the Higher Attestation Commission of the Ministry of Science and Higher Education of the Russian Federation.