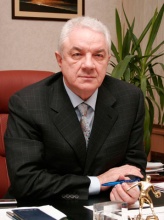 Nikolay Denisovich Tskhadaya was born on 20th October, 1950 in a Lower Domanik village of Ukhta region in the Komi Republic.

After finishing the comprehensive school he worked at the oil refinery of the Yaregsky oil control department. In 1968, N.D. Tskhadaya was enrolled as a student of the Oilfield Faculty of Ukhta Industrial Institute, «Machinery and equipment of oil and gas fields» major, he received the qualification of a mechanical engineer.

During his study years, N.D. Tskhadaya has contributed immensely to the social life of the University. He served as a deputy secretary of the Komsomol committee of the Institute as well as a chairman of the trade union committee. Nikolay Denisovich was behind the creation of a student volunteer construction movement of Ukhta Industrial Institute. In 1984 he completed his postgraduate studies at the Moscow Institute of Petrochemical and Gas Industry named after I. M. Gubkin. Since 1984 he had been working at Ukhta Industrial Institute (now Ukhta State Technical University) in various positions: senior laboratory assistant, assistant, senior lecturer, assistant professor, Vice-Rector of International Relations and Social Affairs of the Institute, since June, 1997 N.D. Tskhadaya was elected as rector of Ukhta State University. Professor Nikolay Denisovich Tskhadaya was unanimously elected as a President of USTU by the decision of the academic Council of the University on November 12, 2018.

In 1986 he completed his thesis for the degree of Candidate of Sciences on the theme «The study of working conditions in the mine while utilizing oil thermo-alkali method of reservoir development». After his dissertation in 1999 on «Complex assessment of oil mining impact on the environment and working conditions», N.D. Tskhadaya was awarded a Doctor degree in Technical Sciences. In 2000, Nikolay Denisovich was awarded a title of Professor. N.D. Tskhadaya is an author of numerous scientific papers and has a number of patented inventions. Nikolay Denisovich’s research undertakings are concentrated in systematic optimization of work conditions in underground coal-mining industry and the protection of ecosystems, and security of thermo-mining of heavy oil extraction method fields. The main issues are considered to be the labor safety, security of life, and environmental protection. The main scientific and scientific-technical achievements of oil scientist, N.D. Tskhadaya, are considered to be the developments in the new areas — a systems approach to safety in the oil mines, integrated assessment methodology for impact of oil mining on the environment, and the design of multi-channel pipeline of non-metallic materials for environmental safety of pipeline of oil mines. He is an author of about 200 scientific and educational-methodical works, including 8 monographs, 10 textbooks and teaching aids. He has ten patents for inventions.

The result of the administrative activities of Nikolay Denisovich was the assignment of the University status to the Ukhta Industrial Institute in 1999, and in 2011, by merging with the Ukhta Mining and Oil College and the Ukhta Industrial and Economic Forest College, the university was reorganized into the first large university complex in the Komi Republic. In 2012, the complex entered the Ukhta Industrial College, in 2013 - the Vorkuta branch of the National Research University "Gornyi". The university consists of three institutes, three faculties, two branches in the towns of Vorkuta and Usinsk, two colleges and a technical school. There are faculty of pre-university training, the Institute for Advanced Studies - an independent appraisal and methodological center, a graduate school, three dissertational councils. Twelve scientific and pedagogical schools conduct research at the university, a network of innovative educational, methodological and scientific-production centers, scientific institutes. On the basis of the University, an innovative territorial cluster of the Republic of Komi "Oil and Gas Technologies" was formed.

Under the leadership of Nikolay Denisovich, the material base of the university was also developed intensively. Today the university has fourteen teaching and laboratory buildings, ten dormitories, a large scientific and technical library, an advanced publishing and printing base, a powerful sports complex, an excellent sanatorium-dispensary, a recreation center, an educational and geodetic base, a training oilfield, an educational and experimental forestry establishment.

In many respects thanks to the energy, purposefulness, interest of Nikolay Denisovich, the number of business partners of the university has significantly increased. The university has concluded agreements on scientific and technical partnership with such giants of the domestic economy as Gazprom, Lukoil, Transneft, Rosneft, effective cooperation with academic institutions and their branches. At the expense of partner companies, about one hundred modern specialized audiences and laboratories were installed and opened in USTU. The university is a part of the National Scientific and Educational Innovation and Technology Consortium of Higher Educational Institutions of Mineral and Raw Materials and Fuel and Energy Complexes. The international partnership is intensively developing, Ukhta University is cooperating with a number of foreign universities, students from close and far abroad countries are studying at USTU. The University participates in a number of European projects.