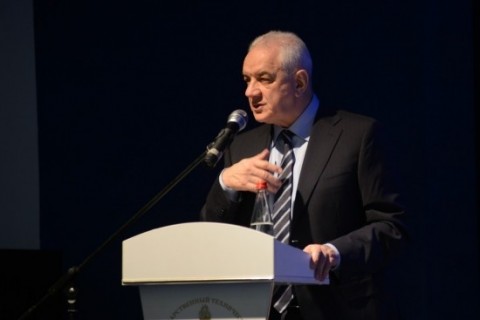 On Saturday, October 12, a two-day inter-regional scientific-practical conference "The role of universities in the implementation of Russia’s Arctic strategy: technological, environmental, socio-cultural aspects", dedicated to the Year of environmental protection in Russia, was completed at Ukhta State Technical University.

Among the organizers of the forum were the Government of Komi Republic, Ukhta State Technical University, Komi Scientific Center RAS, Cities Alliance of Arctic and the High North. USTU rector took the initiative in holding the conference, and the university media, scientific and pedagogical magazine "Higher Education in Russia", magazine "Proceedings of the Komi Science Center, Ural branch, RAS", the Ministry of Natural Resources and Environmental Protection of RK, the international project "PROON/GEF" provided informational support of the event.

Opening the forum, USTU Rector, Professor Nikolai Tskhadaya, on the rights of the owner, noted that it is difficult to overestimate the importance of the Arctic in the context of the future of Russia.

In recent years, the state itself in the person of the President and the government clearly and unambiguously stated the strategic interests of Russia in the Arctic. They approved the principles of the state of Russian policy in the Arctic up to 2020 and the strategy for the development of the Arctic zone of the Russian Federation to ensure national security up to 2020. The law on the Arctic zone of the Russian Federation is going to be adopted. One of the main activities of the Arctic strategy is education, the provision of training, retraining and advanced training in higher and secondary special education for work in Arctic conditions, the rector said. When we talk about the role of universities in the implementation of the Arctic strategy we realize the value and capabilities of the entire system of higher education, and we emphasize the critical role of the northern higher education institutions here. The experience of several decades shows that the staff trained by the Northern higher education institutions, is more motivated to work in a northern environment than graduates of other universities in the country. The graduates of our universities stay in the North. Thus, USTU graduates make up 70 percent of the engineering staff of almost all large industrial enterprises of the republic and neighboring regions. Territorial localization allows them to use northern facilities as a support base and scientific training ground.

According to Nikolai Tskhadaya, Ukhta University should be part of a whole line of educational strategic outposts in the north of Russia. The development of USTU branches in Usinsk and Vorkuta provides direct interaction with companies operating in the Arctic, as well as it provides an opportunity to conduct field researches, training of professors and students practice on oil and gas facilities operating in arctic conditions. Usinsk branch can serve as a "source of manpower" to work on the Prirazlomnaya and other fields of LLC "Gazprom", located in the zone of the Timan -Pechora Basin of the Arctic shelf of Russia. The prospects Vorkuta branch, which includes a branch of St. Petersburg Mining University are also important. Located on the coast of the Kara Sea, a compressor station of LLC "Gazprom Transgaz Ukhta" and water crossing through Baidarata Bay can be an excellent platform not only for the acquisition of production skills of students, but also for the creation of research center, which is used to implement and test innovative technologies.

Immediately after the Rector’s speech, there was a session with the branches of the University in Usinsk and Vorkuta via Skype. The heads of branches said that parallel Ukhta forum in these cities there are scientific and practical conference of "local value", dedicated to the sustainable development of northern cities in the context of Russia’s Arctic strategy. Also the representatives of the northern cities of the country welcomed the participants at the opening ceremony.

The problems that are directly related to the implementation of the strategy of the Arctic were announced in plenary reports. Member of the Public Chamber of Russian Federation, President of the Union of Cities of Arctic and the High North, Igor Shpektor, touched the socio- economic aspects of the development of the Russian Arctic. President of the Academy of Geopolitical Problems, Doctor of Historical Sciences, Colonel-General Leonid Ivashov, told in detail about the geopolitical component of Arctic strategy and probability of conflict of interest of the countries, applying for a "piece" of the Arctic. There were reports on the health of northern residents, disparities and social and economic development of the northern cities, the scientific and technical aspects of the Arctic strategy.

The second day of the conference was devoted to the work of the sections and roundtables on most diverse subjects: environmental and technological aspects of the balanced nature management (section number 1), socio-economic and legal bases for development of the northern territories (section number 2). A round table with the participation of representatives of educational institutions of our Republic and the neighboring regions was devoted to the regional education systems of the northern higher education institutions. During the second round table it was decided to create Ukhta branch of the Russian Geographical Society, USTU Rector was elected its president.

At the end of the scientific-practical conference, Nikolai Tskhadaya and Igor Shpektor met with reporters and summed up the forum.